Is Goldfish a part of Persian Norooz 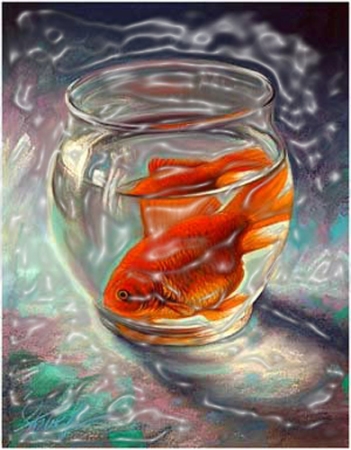 I must start by admitting that in the past 30 or so years of preparing my family’s Norooz /Nowruz  table on 20 March for Persian New Year,  I have never bought goldfish, despite the widespread practice. When I was younger, I discouraged and prevented my parents to do so and when I was younger still, I used to dread waking up one morning after Norooz Day and finding the goldfish floating sideways on the top of the tank  – a fact that was bound to happen sooner or later and ruin the rest of my holidays.  See? Super-sensitive to the core since time immemorial!  Now, back to our discussion:

In the past few years an increasing number of bloggers and online campaigners have been urging people in Iran to stop buying goldfish as a part of their Norooz table (haft-sin). The reasons given against buying goldfish is manifold with the focus being on the unethical nature of the practice.  [Sight of relief. Finally!]

I mean, common, is it so hard to figure out?  A goldfish imprisoned in a jar is the saddest thing in the world! Why do I want to exhibit it in my exhilarating colorful Norooz table?  By the same token, Norooz itself is much more than a celebration of Persian New Year; it is the celebration of nature, of the re birth, and rejuvenation, of  hope and wealth, health, beauty, purity and happiness that comes with it. It does not take a rocket scientist to figure a captive goldfish does not belong there!

And I am not even talking about the miserable conditions that the poor thing is industrially farmed before being sold; the conditions that it is being kept during its short life at hands of curious children, examining it every so often, etc.

According to online campaigners, each year five million goldfish are killed around Norooz. FIVE Million only in Iran. That’s too depressing.  No, I would say, keeping goldfish is not refreshing on any happy Noroozi table in any part of the world. END_OF_DOCUMENT_TOKEN_TO_BE_REPLACED

Glorious day away from the news 🌅💙🥰
Hello Spring!🦠
Split beans stew, #khoresht_gheymeh is to go meal for important occasions be it wedding or funeral (or Easter I guess! 😉. This is the only non-vegan #Iranian #khoresht I still cook once in a blue moon. Find the link to the recepie in my bio.
Dill/broad beans rice or #shivid_baghali_polo is traditionally served with pot roasted lamb, but is perfectly fine on its own as a #vegan dish! Today marks the end of #norooz holidays called #sizdehbedar, a day ppl would, in normal times, spend in nature in small and large groups and have tons of fun, AND eat shivid baghali polo for some reason 🤔 Well we did the latter at least!! 🤗💚 Find the recipe in my blog.