I cannot believe I have not included khoresh fesenjoon خورشت فسنجون in my Iranian stews yet!  This traditional stew, made primarily with ground walnuts and pomegranate paste or molasses, with a sweet-sour taste, deep aroma and rich flavor is quite unique among other Iranian stews and is regarded a fancy dish served at special occasions and for special guests.

A specialty of Northern Iran, fesenjoon is traditionally cooked using duck meat. Nowadays people use chicken breast or tights instead. Or for a vegan version simply skip the meat step and still get a rich and flavorful stew.  There are certainly more than one method in making a good fesenjoon, but below is just one of them! END_OF_DOCUMENT_TOKEN_TO_BE_REPLACED

What comes to your mind first, when you see or think of an apple? Eve? Newton?  Steve Jobs? Or Fall and pie ?? Amazing how omnipresent apple is, isn’t it? And how diversified, beneficial and of course delicious this “forbidden” fruit of wisdom is.

Iranian culture and literature is full of apple-related references as well, and culinary wise, we cook with apple not only in the Fall but also in spring when a particular type of small sour apple is in abundance in some of Iranian southern cities such as Shiraz. END_OF_DOCUMENT_TOKEN_TO_BE_REPLACED

This sweet-sour, aromatic and sophisticated-looking stew is actually among simple Iranian stews, as it requires only a few ingredients and a couple of easy cooking steps.

In this particular method, I use plums instead of more commonly used prune because I prefer sweet-sour over sweet; and I also add saffron at the very end to take away the dark and add to the richness of taste and aroma. END_OF_DOCUMENT_TOKEN_TO_BE_REPLACED

Fall maybe associated with pumpkin & apple pies, Halloween and Thanksgiving if you reside in the northern hemisphere; and fall is certainly associated with a rainbow of colors no matter where you live. For me, as an Iranian, fall is also strongly linked to my Persian heritage and one of its most beautiful manifestations, Mehregan, or Fall Festival.

This 4000-year old tradition, originally celebrated for the six first days of autumn, has its roots in Zoroastrian religion as well as having cosmic and seasonal connotations:  It is a festival to acknowledge the Autumn Equinox and honor the god of justice “Mehr”; it is also a celebration of the end of harvest season and a way to express gratitude for the gift of nature and gods.  Today, Mehregan has gained even more significance, especially among Iranian expatriates as a means to familiarize the world with Iranian culture, and to preserve what some feel is being diminished by the current regime of Iran.

This year, a group of over twenty active and talented Persian Cuisine Bloggers and writers from around the world got together and decided to have a Persian Food Round Up for the occasion of Mehregan. I am honored and thrilled to have been invited to join this exciting initiative. Please scroll down to see the list of links to these blogs and find out about their selection of Fall-theme Persian dishes. END_OF_DOCUMENT_TOKEN_TO_BE_REPLACED

Okra Stew and a whole lot about it

What do you know about Okra, also known as lady finger? Well, before doing some search for this post, I only knew that in Iran, especially in Khoozestan, it is used to make “khoresh-e Baamieh” or Okra stew with.  Let’s get into some of the things I learned about Okra, before sharing the recipe I already knew for it:

Okra is a flowering plant in the mallow family; an annual herb that is widely cultivated for its edible green seed pods in tropical, subtropical and warm temperate climates, and a hardy plant that can grow even with less water and in hot conditions. For full Botanical description check out wiki  .

END_OF_DOCUMENT_TOKEN_TO_BE_REPLACED

Among the wide range of vegetables, herbs and plants used in Persian stews or khoresh, in combination with chopped lamp or veal and usual suspects for spice, kangar falls in to the category of a region-specific and less known type – even among Iranians inside the country. 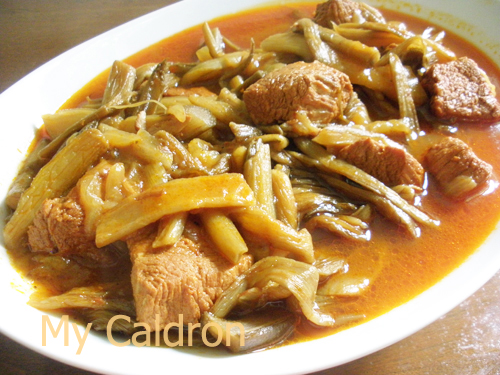 Kangar or acanthus, according to English and Persian Wikipedia, is a genus of about 30 species of flowering plants in native to tropical and warm temperate regions, and originated in Mediterranean, Basin and Asia. It has thick, spiny leaves, stalks not dissimilar to celery and flower spikes bearing white or purplish flowers.  Kangar grows in central and southern Iran in mountains and in dry climate for a short period in March-April.

END_OF_DOCUMENT_TOKEN_TO_BE_REPLACED

In Persian, we have a proverb that compares the “sacrificial lamb” to the benevolent scapegoat- both victims in happy and sad times. 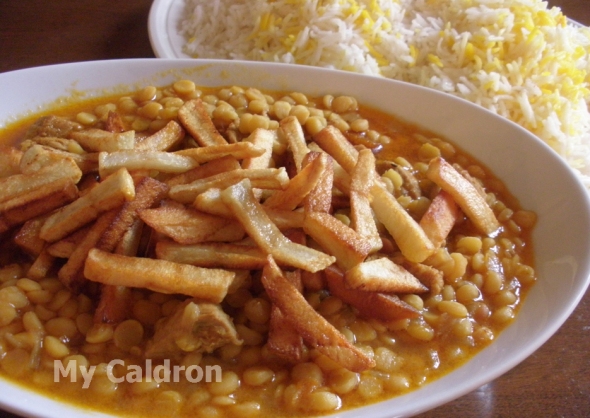 Well, split-peas stew (khoresh-e gheymeh) brings to mind that proverb, as it is traditionally made and served at both weddings and funerals.  No upcoming wedding or funerals planned, yet I have got to share this as one of my favorite  stews.

Vegetarian, and vegan, stew-like dishes are healthy, easy and quick. Most important of all, when it comes to following a vegi recipe or inventing your own, sky is the limit!   Having said that, there are certain “rules” I always follow to in order to come up with a delicious AND pretty looking vegetable-based dish.

END_OF_DOCUMENT_TOKEN_TO_BE_REPLACED

Have you got lots of pumpkins sitting around? I have got a solution!  Add this delicious meal to the list of your Halloween season dishes! It is a unique Persian dish particular to the southern province of Bushehr, called khoresh-e kadoo savaaheli. 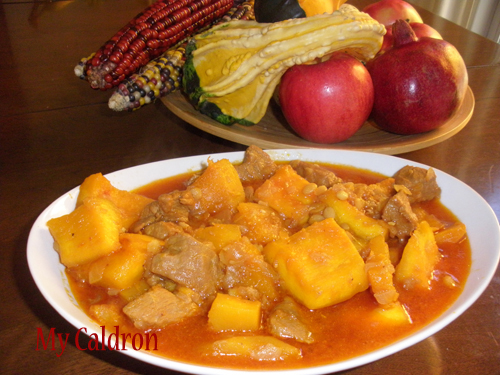 END_OF_DOCUMENT_TOKEN_TO_BE_REPLACED

This past winter (hopefully passed!) I had my sister in law over for a week or so. One day she volunteered to make celery stew for lunch while my husband and I had a long rough day out.  I happily approved and we came home to a dizzying fragrance of steamed rice and perfectly settled hot stew with remotely detectable sent of fresh herbs and saffron.

At first I thought the thrill I felt upon sensing this welcoming food had to do with not having to cook when you are hungry, but rather coming to a homey and ready to be served meal. But when we started the meal I discovered that her method for making this particular stew was completely different than mine) which I have already shared here), and I must admit far too superior to it – to my taste anyway.   The proof to this last claim is that I followed her recipe and came up with the exact same delight.

END_OF_DOCUMENT_TOKEN_TO_BE_REPLACED

Woman life freedom" (zan, zendegi, azadi) is a progressive inclusive slogan that captures the spirit of the ongoing revolution in Iran against all forms of violence, atrocities, dictatorship and 43 years of gender-apartied, and systematic discrimination suffered by Iranian women. "Woman" in this slogan is a socio-political construct rather than a biological one and as such it must be (and indeed is, for most part) supported by women, men, transgender, queer alike.
Woman, Life, Freedom" an inclusive, progressive slogan that frames the current movement in Iran and has the potential to unite us all together across social class, gender and ethnicity against patriarchy, theocracy and all forms of inequality. Let the world hear and amplify the voices of brave women and men in Iran.
Beautiful & powerful @ranamansourmusic ❤️✌️
My dear non-Iranian friends who are following what's happening in Iran, I have two clarifying notes to make based on my conversations with some of you. First, the protests are not "just about" hijab, even though they were set in motion due to a hijab-related violence commited by Iran's "morality police" leading to the tragic death of a young kurdish woman #Mahsa_Amini. These protests are partly about the most basic human right, the freedom to choose and to have control over one's own body & movement - a right denied of Iranian women for over four decades under an Islamic regiem. The slogan originated in Kurdistan and now being chanted across Iran and indeed around the world says it all: "Woman, Life, Freedom". Second, people in Iran marching on the streets and facing the most brutal & heavily armed police force are not seeking to reform or redeem the Islamic Republic of Iran; rather they seek to uproot it, they want a regiem change. This movement cannot be sabotaged by so called "moderate" version of a theocratic dictatorship and is aspired to democracy. Here are more chants from the streets in Iran speaking to the nature and the goal of this uprising: