Fall in the air

I love the way we, mostly in North American cities, try to make the most of summer by skipping the whole Spring season and calling it “summer” as soon as the temperature raises to  18 C .  After a bitter cold and painfully long winter we have all reasons to rush into summer –especially as the rumor has is we have a short one here in Montreal this year.

Well, already boots are out (thanks heaven!) sleeveless out; lots of color out on the streets, shops, gardens, parks, lots of warmth inside and out; And of course a lot of moments to be captured! Have a fun and eventful summer!  (See More Pictures Below!)

END_OF_DOCUMENT_TOKEN_TO_BE_REPLACED

Rayan is a one of my favorite fish restaurants of Middle Eastern origin in Montreal.  It is unique in its simplicity though:  You order the fish or any type of seafood from the counter, tell the cook if you want it to be fried, bar be cued, or grilled, and then will be seated in the restaurant section and wait for your food to arrive. Usually the service is very fast.

END_OF_DOCUMENT_TOKEN_TO_BE_REPLACED

Food Trucks start rolling in Montreal, or do they!?

How do you like buying a plate of salad and smoked meat sausage for $8.00 off a food truck right outside your workplace in downtown?  What if you have to line up for it for an hour or so, and what if the sausage is not made on the spot? Would you still consider it “street food”? The way some of us have come to know taco trucks, pizza trucks, falafel and whoopee pies carts in New York, Seattle, and recently in Toronto, Vancouver and Calgary?

Well, sometime in April 2013, Montreal’s Mayor announced that starting this summer, the 66-year ban on street food will be removed, allowing Montrealers to buy food off the street. …

END_OF_DOCUMENT_TOKEN_TO_BE_REPLACED

I am sure you have heard and probably attended some of Montreal’s fabulous summer festivals: Jazz Fest, Just For Laugh, Les FrancoFolies, Gay Parade, etc. But did you know about Montreal’s Beer Festival?

Montreal Beer Fest, held since 1994, from 29 May to 02 June at “Palais de congress”, starts off the summer and its many colorful festivals.  I went to it last weekend (for the first time) and found it quite different and interesting: Not much of “festivity” (i.e. music, dance) surrounds this event; but a LOT of good beers and ciders are there to taste, with a variety of snacks and appetizers: END_OF_DOCUMENT_TOKEN_TO_BE_REPLACED

The People’s Potato is a student initiated grassroots project, and a vegan kitchen at Montreal’s Concordia University, Sir George Williams Building.  It serves “free” food to about 400 students daily and relies heavily on volunteers labor and every body’s’ good will.♥

The project was started in 1999 by a group of students dedicated to social and environmental justice and conscious of student poverty. Fifteen years into its inception, the kitchen is now operating during the fall and winter semesters all the day of the week, offering students and community members meals by donation; the project and the food is funded be a levy in (undergrad) student registration fees.

END_OF_DOCUMENT_TOKEN_TO_BE_REPLACED

Montreal’s ’98 Ice Storm, through his eyes 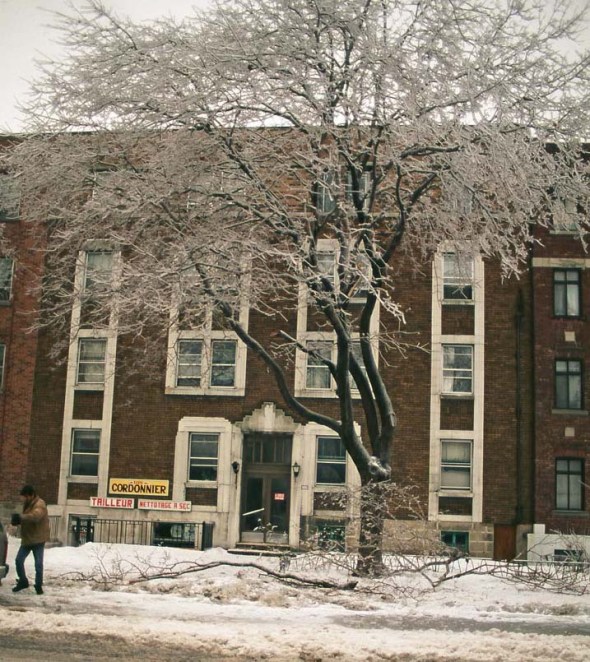 END_OF_DOCUMENT_TOKEN_TO_BE_REPLACED

If you find yourself in downtown Montreal, passing through St. Laurent in Plateau area, make sure you’re hungry. Because right there is located Canada’s oldest Deli, the world famous Schwartz’s, offering the classic, Hebrew tradition smoked meat. And it is offering plenty of it in one single sandwich!

You simply cannot miss the deli, as no what matter what time of the year, there is always a lineup in front of it. If you are willing to settle for a take out, you would be waiting less, but having the meal inside the tiny, crowded space is a part of the tradition if you ask me. END_OF_DOCUMENT_TOKEN_TO_BE_REPLACED

Starting from Mid August all the way to the end of October, just as you feel the warm weather is giving way to a fresh cool one, when the sky is more blue than ever and when you see the leaves go crazy with colors, as if the tree is set on fire, that’s when you know there is time to go for an apple picking trip anywhere in the province of Quebec.

There are several locations in and around the Island of Montreal with huge orchards, where you could do your apple picking and have a great time doing so. The admission is always free, and apple varieties, including McIntosh, Empire, Melba, Lobo, very affordable.   END_OF_DOCUMENT_TOKEN_TO_BE_REPLACED

On the occasion of change of season, Viva Montreal!

END_OF_DOCUMENT_TOKEN_TO_BE_REPLACED

My dear non-Iranian friends who are following what's happening in Iran, I have two clarifying notes to make based on my conversations with some of you. First, the protests are not "just about" hijab, even though they were set in motion due to a hijab-related violence commited by Iran's "morality police" leading to the tragic death of a young kurdish woman #Mahsa_Amini. These protests are partly about the most basic human right, the freedom to choose and to have control over one's own body & movement - a right denied of Iranian women for over four decades under an Islamic regiem. The slogan originated in Kurdistan and now being chanted across Iran and indeed around the world says it all: "Woman, Life, Freedom". Second, people in Iran marching on the streets and facing the most brutal & heavily armed police force are not seeking to reform or redeem the Islamic Republic of Iran; rather they seek to uproot it, they want a regiem change. This movement cannot be sabotaged by so called "moderate" version of a theocratic dictatorship and is aspired to democracy. Here are more chants from the streets in Iran speaking to the nature and the goal of this uprising:
Here is my take on current protests in Iran. Please see the complete text at @womenfromtheeast. Thanks for the opportunity! ✊❤️
#iranprotests2022 #mahsaamini #opiran #woman_life_freedom
My garden still going strong 🧡🌶️🌱🍅🍆💚