Food Trucks start rolling in Montreal, or do they!?

How do you like buying a plate of salad and smoked meat sausage for $8.00 off a food truck right outside your workplace in downtown?  What if you have to line up for it for an hour or so, and what if the sausage is not made on the spot? Would you still consider it “street food”? The way some of us have come to know taco trucks, pizza trucks, falafel and whoopee pies carts in New York, Seattle, and recently in Toronto, Vancouver and Calgary? 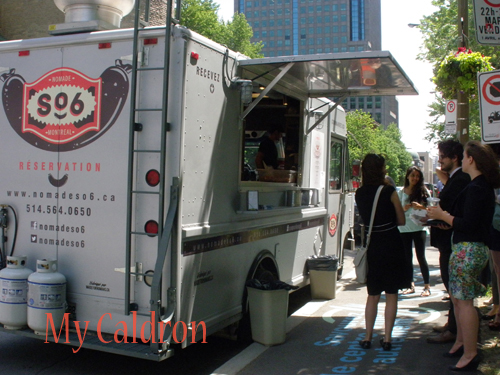 Well, sometime in April 2013, Montreal’s Mayor announced that starting this summer, the 66-year ban on street food will be removed, allowing Montrealers to buy food off the street. …

Quite exciting news for foodies and not-so foodies alike, despite the fact that we knew this was a pilot project with only nine sites allocated to food trucks by Ville Marie borough. And still an exciting news despite the fact that the regulations set to issue permits for “food trucks” sounded restrictive and excessive: For example, permits are given only to those who own or used to own restaurants, and even the foods offered in the trucks must meet certain standards, making them taste and cost higher than what street food is meant to be. So, even before it took off, the project made some controversy over its real intent. 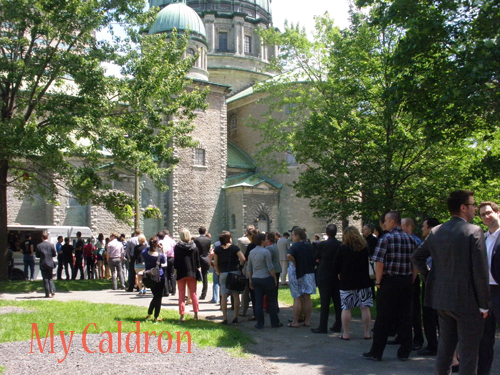 On June 20th, the project’s launch day, I headed downtown and tried to visit four sites out of nine. I was able to spot only one truck, as others seemed not prepared yet to show up. At Place du Canada, at launch time there was a line up of about 200 people, exclusively working class enthusiasts, plus a lot of media coverage. The food? Truth be told, I did not have time to stand on the line that long, but I did talk to people who said it tasted great and also allowed me to take pictures of their plates!

Let’s hope the project will live to expand- to include truckers of all walk of life offering affordable and plentiful real ‘street foods’.

See a powerful performance of the Chilean "las Tesis" performed in Persian by a feminist group of Iranian women in London ✊️✊️
Woman life freedom" (zan, zendegi, azadi) is a progressive inclusive slogan that captures the spirit of the ongoing revolution in Iran against all forms of violence, atrocities, dictatorship and 43 years of gender-apartied, and systematic discrimination suffered by Iranian women. "Woman" in this slogan is a socio-political construct rather than a biological one and as such it must be (and indeed is, for most part) supported by women, men, transgender, queer alike.
Woman, Life, Freedom" an inclusive, progressive slogan that frames the current movement in Iran and has the potential to unite us all together across social class, gender and ethnicity against patriarchy, theocracy and all forms of inequality. Let the world hear and amplify the voices of brave women and men in Iran.
Beautiful & powerful @ranamansourmusic ❤️✌️