Norooz is around the corner

This is a rather lengthy general introduction and personal note on Norooz the deeply-cherished.  Persian New Year which occurs at the exact moment of the start of spring, this year on Monday March 20th at 01:11 AM (Montreal) 08:44 AM (Iran). 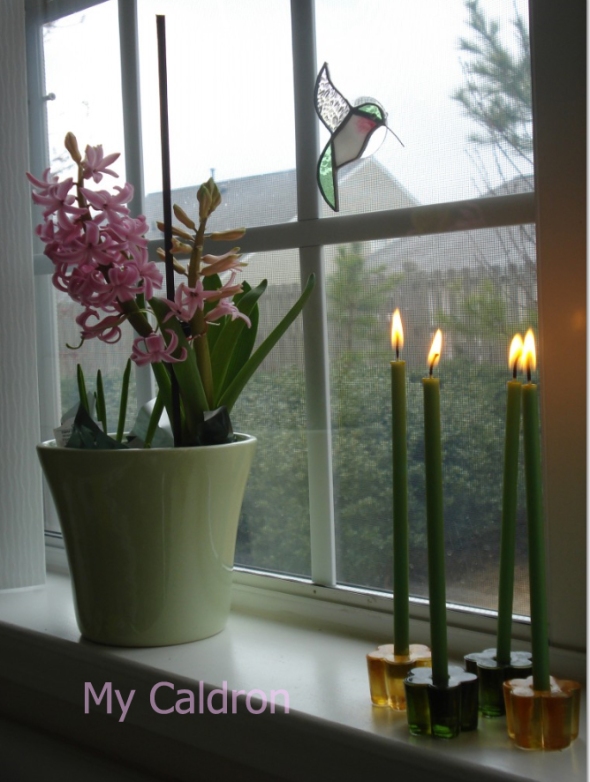 My new header shows a Norooz table setting “sofreh”, which should contain certain items, as I will explain below. The contents as well as the arrangement of sofreh items vary according to individual’s taste and beliefs. I love my sister’s artistic “sofreh” shown in the header. Don’t you!? And let me confess, I am dying to share mine with you once I set it – probably sometime on Sunday evening

For now, let’s just turn this music on and listen to Simin Ghadiri, a Persian folk singer, while you’re reading my account of Norooz. You don’t really need to understand her words, her voice alone is spring on itself! (Lyric describes spring days, the mountains, and fields covered with flowers)

Norooz is another tradition that most Iranians hold so dear, especially in the face of our Islamic regime back home desiring to eliminate it. To me, Norooz just has to be a huge deal! For half of my life, back home, this was our biggest collective life event and celebration: My large family and everyone I knew prepared for the first day of the spring and our New Year by turning the house upside down cleaning, dusting, washing, and renovating every single item in the house. In what seemed quite magical to me, the elders also grew round plates of wheat and slender clay jars of cress. The most fun part was nibbling the half-dozen types of sweets especially made for the occasion at home, days in advance: baklava, chick-peas, coconut, rice cookies and my favourite, almond with honey. At the exact moment when the year turned, we used to all sit around the most elaborate Noroozi sofreh, only to hear the announcement on TV; exchanged kisses and hugs in the midst of cheers and laughter and… and the most exciting part: We received our “eydi”; Norooz present, which was always brand new bills given by older members of the family to the younger ones. I was the youngest of all and the richest in the first couple of days!!

For the next twelve days, we visited each and every family member and friend in the city that we were closely or remotely related to–each visit just long enough to renew our kinship ties and accept offerings from the endless flow of sweets, teas, fruits and aajil (mixed nuts), and more new bills

And finally, the 13th day, called for another special day, which I will tell you about, when we get there.

The point I was trying to make was that Norooz just has had to be a huge deal for me, not only because of the first half of my life spent in Iran, but for the other half spent in exile. You see, when the time comes to celebrate our New Year, I have this urge or self-imposed obligation to explain it to people around me: in college, workplace, friends gatherings, you name it! God knows how many essays I have written on “Persian New year” and how many times I have presented it, (represented my culture), in front of a crowd. The number of times I have reiterated the following statements exceed even my semi-formal presentations “You know, our new year is the only one without any religious origin”, or “our calendar is different too, yes we are at 1391 now, no it does not mean we have a shorter civilization, let me explain….” or “Oh,, this has nothing to do with Islam, this is an ancient, Zoroastrian thing”… and so on and so forth.

Presenting, or representing aside, I truly feel that I must prepare for Norooz, hold and celebrate it – you know, soak wheat well in advance, go out of my way to find a hyacinth, paint eggs at 2 AM because I don’t have enough time during the day and buy if not make all types of required sweets (true, Iranian stuff have become way more accessible in Mtl. Over the past few years, we now even have Norooz bazaar) I have to do all that even though I am all alone at home, even though there is no sign of spring out in the wet, miserable cold Montreal weather, even though I am at work and no one really shares my feelings. Why so? Well, because Norooz is quite a meaningful slice of life to reflect on, a glorious thread of identity to cling on to. Or so I believe!

The source of the following article is Wikipedia, I have selected some more general note and added my notes in [ ]

Nowrūz, “New Day”, is the name of the New Year in Iranian calendars and the corresponding traditional celebrations. Nowruz is also widely referred to as the Persian New Year.

Nowruz marks the first day of spring and the beginning of the year in Iranian calendar. It is celebrated on the day of the astronomical vernal equinox, which usually occurs on March 21 or the previous/following day depending on where it is observed. As well as being a Zoroastrian holiday and having significance amongst the Zoroastrian ancestors of modern Iranians, the same time is celebrated in parts of the South Asian sub-continent as the new year. The moment the Sun crosses the celestial equator and equalizes night and day is calculated exactly every year and Iranian families gather together to observe the rituals. Originally being a Zoroastrian festival, and the holiest of them all, Nowruz is believed to have been invented by Zoroaster himself, although there is no clear date of origin. ….. The term Nowruz in writing, first appeared in Persian records in the 2nd century AD, but it was also an important day during the time of the Achaemenids (c. 648-330 BC), where kings from different nations under the Persian empire used to bring gifts to the Emperor, also called King of Kings (Shahanshah), of Persia on Nowruz.

The UN’s General Assembly in 2010 recognized the International Day of Nowruz, describing it a spring festival of Persian origin which has been celebrated for over 3,000 years.[12][13] During the meeting of The Inter-governmental Committee for the Safeguarding of the Intangible Heritage of the United Nations, held between 28 September – 2 October 2009 in Abu Dhabi, Nowrūz was officially registered on the UNESCO List of the Intangible Cultural Heritage of Humanity. Nowrouz is celebrated in the following counties: Afghanistan, Albania, Azerbaijan, Georgia, Iran, Iraqi Jurdistan, Kazakhastan, Tajikistan, Turkeminstan, Uzbakistan

Haft Sîn (Persian: هفت سین) or the seven ‘S’s is a major traditional table setting of Nowruz. Today The haft sin table includes seven specific items starting with the letter ‘S’ or Sīn (س) in the Persian alphabet. The items symbolically correspond to seven creations and holy immortals called Amesha Sepanta protecting them. The seven elements of Life, namely Fire, Earth, Water, Air, Plants, Animals, and Human, are represented. They also have Astrological correlations to five planets Mercury, Venus, Mars, Jupiter, Saturn, and Sun and Moon. With the advent of Islam the word Amesha Sepanta shortened to and eventually was remembered by just the letter S and the number. The Haft Sin has evolved over time, but has kept its symbolism. Traditionally, families attempt to set as beautiful a Haft Sīn table as they can, as it is not only of traditional and spiritual value, but also noticed by visitors during Nowruzi visitations and is a reflection of their good taste

The Haft Sīn items are:

· samanu – a sweet pudding made from wheat germ – symbolizing affluence

· senjed – the dried fruit of the oleaster tree – symbolizing love

Other items on the table may include:

· a mirror (symbolizing cleanness and honesty)

· decorated eggs, sometimes one for each member of the family (fertility)

· a bowl of water with goldfish (life within life, and the sign of Pisces which the sun is leaving). As an essential object of the Nowruz table, this goldfish is also “very ancient and meaningful” and with Zoroastrian connection

· [This is NOT true!! Goldfish has no Iranian connotation and buying the poor creatures only to throw their dead body out a few days later is so against life celebration; It only serves commercial purpose and many modern Iranians have strong feelings about NOT including it their Noorooz sofreh.]

· a holy book (e.g., the Avesta, Qur’an, Bible, Torah, or Kitáb-i-Aqdas) and/or a poetry book (almost always either the Shahnameh or the Divan of Hafez.

[Happy Spring everyone and “Norooz Mobaarak” !]

Woman life freedom" (zan, zendegi, azadi) is a progressive inclusive slogan that captures the spirit of the ongoing revolution in Iran against all forms of violence, atrocities, dictatorship and 43 years of gender-apartied, and systematic discrimination suffered by Iranian women. "Woman" in this slogan is a socio-political construct rather than a biological one and as such it must be (and indeed is, for most part) supported by women, men, transgender, queer alike.
Woman, Life, Freedom" an inclusive, progressive slogan that frames the current movement in Iran and has the potential to unite us all together across social class, gender and ethnicity against patriarchy, theocracy and all forms of inequality. Let the world hear and amplify the voices of brave women and men in Iran.
Beautiful & powerful @ranamansourmusic ❤️✌️
My dear non-Iranian friends who are following what's happening in Iran, I have two clarifying notes to make based on my conversations with some of you. First, the protests are not "just about" hijab, even though they were set in motion due to a hijab-related violence commited by Iran's "morality police" leading to the tragic death of a young kurdish woman #Mahsa_Amini. These protests are partly about the most basic human right, the freedom to choose and to have control over one's own body & movement - a right denied of Iranian women for over four decades under an Islamic regiem. The slogan originated in Kurdistan and now being chanted across Iran and indeed around the world says it all: "Woman, Life, Freedom". Second, people in Iran marching on the streets and facing the most brutal & heavily armed police force are not seeking to reform or redeem the Islamic Republic of Iran; rather they seek to uproot it, they want a regiem change. This movement cannot be sabotaged by so called "moderate" version of a theocratic dictatorship and is aspired to democracy. Here are more chants from the streets in Iran speaking to the nature and the goal of this uprising: