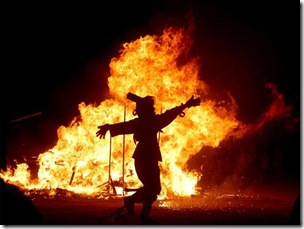 If you are a non-Iranian and have been following my blog so far, it would probably mean that you already know Iran and Iranians well enough to have heard of chahrshanbeh suri, the Iranian Fire Festival – the one which is held on the last Tuesday night before the Persian New Year. The New Year starts March 21st, which makes chahrshanbeh suri tomorrow night. If you don’t know about it, look it up here. This is a pre-Islamic and much loved tradition, with lots of special events and OF COURSE special foods, such as sour soup, aash-e reshteh and mixed nuts which go with it!

Revelers in Iran celebrate chahrshanbeh suri by jumping over bonfires in the streets while the Islamic state fumes with vigorous loathing of the tradition, but fights a losing battle against it. We outside Iran, however, rarely manage the bonfire part of the night due to our cities’ fire regulations, but some of us at least observe the aash-e reshteh part.” [excerpts from my upcoming book] 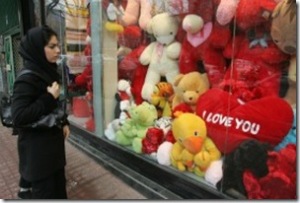 Good article except the title could have been more accurately chosen to read : “Five places that are forbidden to feel love this valentine’s day!” They are: Saudi Arabia, Iran, Malaysia, Uzbekistan , Belgorod (Russia). [Photo:  “An Iranian woman looks at the window display of a gift shop in Tehran on Valentine’s Day February 14, 2008. ATTA KENARE/ AFP/ Getty Images]

What does the future hold for Iran?

A CNN report: What does the future hold for Iran?
Translate into Persian

Viewed more than 16,000 times in the past six days, this 45-minute documentary is made by the Norway based “Bboy Spaghetti”. It is an entertaining and inspiring account of Break and Hip Hop dance and culture in today’s Iran – A country where every aspect of personal and social life including access to the internet is curbed and controlled by the government; where bloggers – men and women alike – are being arrested and detained on a regular basis for voicing their opinions and where people continue to write, to produce underground music, to live. to dance and to Hip Hop! Watch for yourselves and enjoy the skill, spirit and innovations of this incredibly resistant generation, comprising 70% of population.  (Girls are not present in this video but I have heard from friends in Iran that they do practice it in Girl’s Gyms. Their skill level? Not known really). 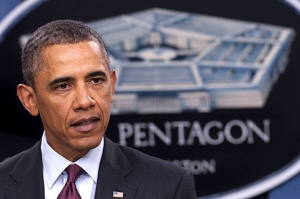 War with Iran: A Conflict Obama Hopes to Avoid May Be Imposed on Him. By Tony Karon, Time. Jan 17, 2012 .(Source of photo: same place)

It is Only Sound That Remains: Some Reflections

In a candle lit reception hall at Baha’i centre in downtown Montreal about fifty of us gathered in an intimate setting to listen to “It is Only Sound that remains”; a powerful and sensitive account of life of Ziba Kazemi and of those who were deeply touched by her life and death.

The event, co-sponsored and co-produced by Montreal Life Stories Project, COHD, Kazemi Foundation, and Vivacite Montreal was initially performed on April 2011 at Concordia University and will be staged for a third time next Thursday September 29th at the same location.

‘It is Only Sound That Remains’ is foremost a performance through sound: The sounds assembled from kazemi’s archival footage, recorded voices and interviews with Stephan Kazemi, enriched with soundscapes, and Persian music, and of course performing artists’ voices…. END_OF_DOCUMENT_TOKEN_TO_BE_REPLACED

Ziba Kazemi, an Iranian-Canadian photojournalist, was murdered by the Islamic Regime of Iran in 2003 while in custody. She was arrested on charges of taking pictures of prisoners’ families who had gathered outside the notorious Evin prison. Ziba was born in Shiraz in 1949 and spent most of her life in France and Canada. She resided in Montreal with her only child, Stephan , who was in his early 20s at the time of his mother’s death. The circumstances of Ziba’s brutal death at the hands of Islamic regime, her courage in confronting the officials, and her family’s five-year battle in launching a law suit against the government of Iran brought international recognition and support – including from organizations such as Canadian Centre for International Justice and Amnesty International, and the worldwide media attention to her case – albeit sparingly.