← Summer Solstice
Blueberries are good for you →

Mohawks on top of skyscrapers

Kahnawake , home to about 8000 Mohawks, is one of the 30 reserves of the Native Canadian in the province of Quebec. It is located approximately 10 kilometers from the city of Montreal just off the Mercier Bridge south of St. Laurent River.

I often go to Kahnawake for various shopping needs. The first time I visited their cemetery (as I always do upon discovering a new place), I was absolutely amazed to find construction pieces of metal installed on so many graves. I had some faint idea about the association and found out more about it through Straight Dope. Following is a is part of what Cecil Adams has to say in response to the following question: What’s the deal with the historical hiring of Native American Indians to work on skyscrapers? Have they all truly been blessed with a lack of fear for heights? (I have included pictures that I took in my recent trip to Kahnawake)“…It’s not just any American Indian who goes into ironwork, it’s mostly Iroquois, specifically Mohawks from the Kahnawake reservation near Montreal.

The Mohawks got into the business by happenstance. In 1886 a Canadian company was building a railroad bridge over the St. Lawrence river near the Kahnawake reservation. The company hired a number of Mohawks as day laborers, but found they loved to climb around on the ironwork without any apparent fear of heights. Since it was difficult to find men with the moxie for high work, the company decided to try an Indian crew. “We picked out some and gave them a little training, and it turned out that putting riveting tools in their hands was like putting ham with eggs,” a company official later wrote. Mohawks helped build bridges from then on. 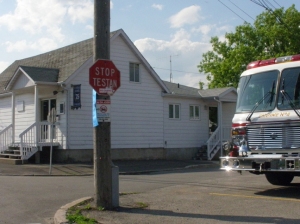 In 1907 96 men were killed when a span of the Quebec Bridge collapsed during construction; 35 of them were Indians from Kahnawake. The dead were buried in the Kahnawake cemetery under crosses made of steel beams”.

Your average construction worker might have decided it was time to go into a safer line of work, but not the Mohawks. From that day forward every young male on the reservation was convinced that risking your neck on high steel was the coolest calling this world could offer. The Mohawks eventually branched out from bridges into general steel construction, including office buildings. During the late 1920s a number of Kahnawake crews started working on skyscrapers in New York, and they’ve been a fixture of the city’s construction scene ever since. Some crews — the members are often related to one another — spend the weekends on the reservation and drive down to New York for the week; others live in Brooklyn. But they’ll travel anywhere if there’s steel to climb.” 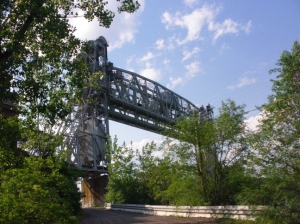 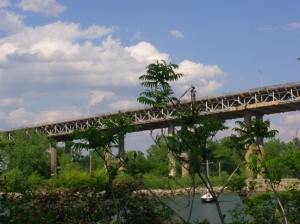 Read the rest of the story here, and more pictures below khnawaki reserve and from the Mercier Bridge taken in Kahnawaki and on the bridge looking at the Island of Montreal.

2 Comments on “Mohawks on top of skyscrapers”

میگو پلو با #تهدیگ_نون 😋🤗
Looking up!
Any day is a good day for potato #tahdig ☀️ plain rice made #Iranianstyle, my special vegetables stew and lots of #sabzi . What's not to love ❤️🧡💛💚 This is the same vegetables dish as the one four posts down. It goes very well both with flat bread & rice 😋
On geranium 💦❤️